In late February, the SEL team traveled to the site to check on the system and install two additional pumps. Conditions during the visit were incredibly dusty due to a dust storm in the region. Under those dusty conditions only two pumps could be turned on at once, but under favorable sunny conditions a few days after the storm, all four pumps could be turned on at once consuming 4.7kW from the 6.8kW array (70%). 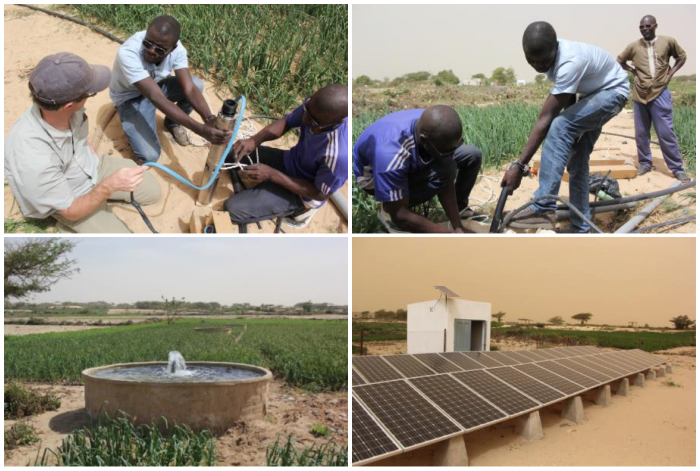 Tariffs and Revenue: After a two-week grace period for testing and allowing the customer to get comfortable with the new system, farmers began paying for this service. The initial tariff of 350 CFA (US$ 0.60) per hour was decided upon with the community. During the first two months of operation with four pumps the management committee collected 39,000 CFA (US$ 66). Usage was lower than expected for two of the four farmers. We are exploring the underlying reasons. One contributing factor was that harvesting had begun on some farms meaning irrigation was not needed. But there were concerns about the tariffs as well. If consumption patterns are more like that of the farmer who used the system the most, monthly revenue per pump would be approximately 18,000 CFA (US$ 30). This means with only two pumps running at average levels, the management committee should be able to cover the costs of the salary for the pump operator.

Local pump operator trained: A local community member was trained to operate the pump controller. His main role is to turn the pumps on and off as needed by the farmers, to keep a paper record of all transactions, to keep the PV panels clean and secure and to signal any problems with the controller to the local project manager. His monthly wage (20,000 CFA; US$ 33) will be covered by the project for the first several months but taken over by the management committee after that and covered by revenue generated by the system.