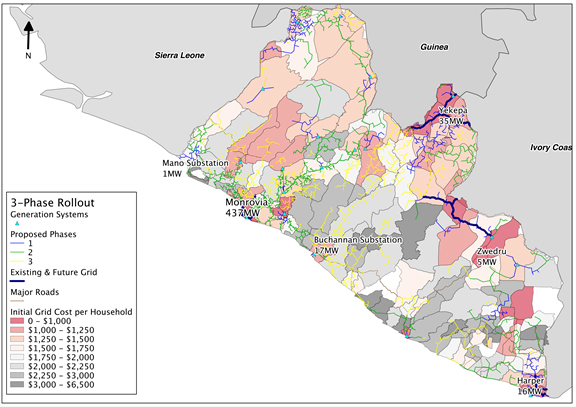 Liberia’s Challenge: The electricity access rate in Liberia is among the world’s lowest, with less than 3% of the population connected to grid power. This leaves the vast majority of people reliant upon various informal and unreliable systems. The Liberian Electricity Corporation (LEC) and government are quickly trying to change this by expanding access within the capital of Monrovia and some other select rural areas. The question that arises though is exactly how the government ministries and LEC, both with finite resources and time-bound deadlines, should focus their efforts for maximum investment effect. In a nation without much pre-existing infrastructure and an overwhelming unmet demand, this can be both a difficult and non-obvious task not to mention overwhelming.

Gathering Data: Our first step was to assess the situation by building an evidence-based data layer. In a data-rich era, there exists many avenues for gathering applicable information. Fortunately for Liberia there is excellent information on population, demographics and existing power infrastructure in varying forms which we aggregated into a single dataset.

Considering our team saved considerable time not conducting a data collection exercise, we instead gave a series of workshops focusing on data collection instruments; ODK, formhub, and Android devices. These efforts will serve to speed up current and future surveying and primary data collection efforts.

Demand Analysis: Planners have varying access to data—sometimes a deluge or too little at others—but in Liberia there seems to be just enough. Assessing demand in Liberia therefore requires data munging  or more formally the process of taking data from one format (AutoCAD, Garmin, AGIS, Excel, .dbf etc), manipulating it in some other form, and passing it into a paired, consolidated geospatially-referenced database. This enables practitioners to quantify the Liberian demand for electricity.

Framing the demand in economic and engineering terms requires research centered around historical trends, comparable nations, local experts’ estimates, literature consensus, etc. This scientific approach for quantifying demand does have the benefit of being objective as it seeks to separate planning decisions from intuition and emotional or political motivations. Often times, we will seek disconfirmation of commonly held assumptions to strengthen the validity of our planning process. Applying this methodology to Liberia, we are therefore able to quantify a gradient of the unmet market for energy.  We consider the internal spread of rural and urban customers and benchmark Liberia to other similar countries to arrive at reasonable demand projections.

Quantifying Supply: With a solid understanding of the Liberian demand for electricity, both current and future, we are then able to work with planners and stakeholders to project the supply needed. Knowing the current supply and unmet demand allows us to rapidly apply a generalized gap analysis. How much generation needs to come online in the next 5, 15, 30 years?  Does the current pipeline of projects and other potential resources cover this gap?  Framing the question in the right way often presents the answer as to what is needed.

Plan to Fill Gaps: With demand quantified and an understood supply gap, we can develop a proposed plan to fill in the gaps. It is actually quite valuable to quantify a plan before getting into detailed design and construction nuances. The whole process is often iterative, but especially so at this initial stage of the game. Using our own analyses and other tools such as our freely available optimizer, NetworkPlanner, we start to explore economic questions such as: How many kilometers of power lines are needed and which towns should be connected to which systems? What is the total and disaggregated generation capacity needed? What does a Liberian ubiquitous power grid look like? More importantly though, we offer recommendations on immediate finite steps towards achieving the Liberia Vision 2030. We offer snapshots of a future Liberian nation at 5, 15 and 30 year points along the journey of energy equality and the eradication of poverty.

Take-Home Lessons:  What did this teach us about the Liberian energy situation? We already knew that Liberia is a low-income country in energy transition, but one that is richly endowed with natural resources. After our engagement, we can now estimate that with $1B and 30 years time, the country could have 500MW of power generation. 10,000km of power lines would provide 89% of the population with grid-access while the remaining population would be served by sustainable standalone power systems. This $1B investment would enable an entire African nation to rise above poverty and take a seat at the global economy. Can the White House earmark a fraction of its $7B Power Africa Investments towards Liberia’s quest for universal electricity access?