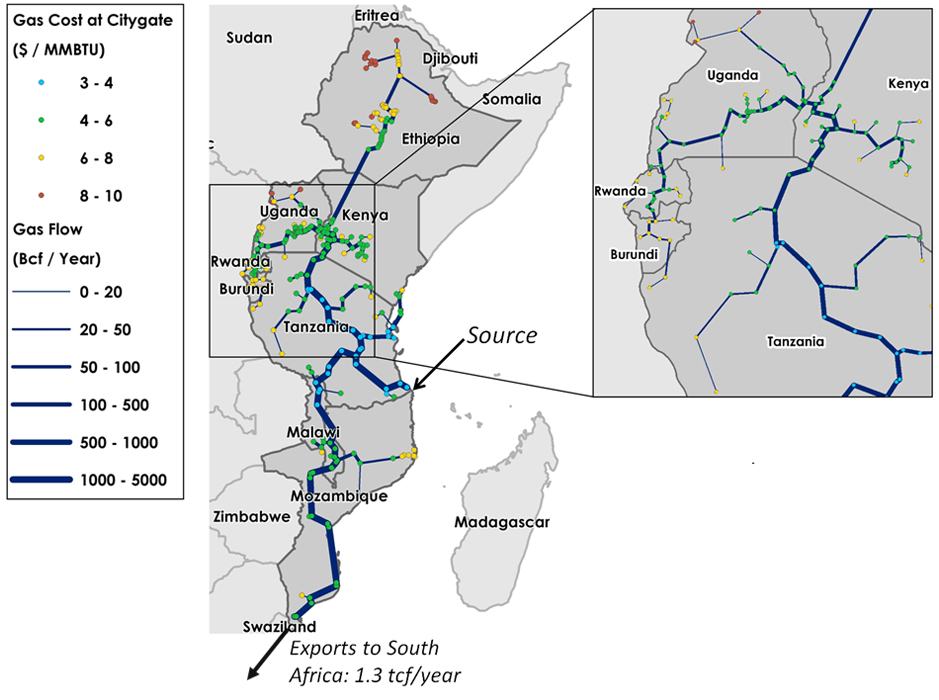 Optimal transmission pipeline network and gas cost at city gate (baseline scenario). Based on potential gas demand for 2050 and a gas production cost of $3/MMBtu. The required investment is estimated at $56.7 Billion.


Huge offshore natural gas resources have been identified in East Africa (Mozambique and Tanzania). Although this resource is already largely exploited in some sub-Saharan countries, the majority is exported outside of the continent with limited domestic use. Because energy in East Africa is currently constrained by infrastructure, not demand, the Sustainable Engineering Lab, in partner with Eni S.p.A is conducting research to find ways to leverage these resources to develop the economies of the region. Natural gas could provide an affordable energy resource that could lower the cost of energy for fertilizer, cooking, transport and industry and in turn address the nexus of food, health, gender, urbanization and jobs.

Natural gas is a flexible resource that can be used for various applications. While a large share of the rural and urban population in Eastern Africa depends on solid biomass for cooking, which causes deforestation and health problems, natural gas could represent a clean and affordable alternative. Natural gas — as a fuel for combined cycle power plants — allows for generation of electricity at an affordable price and can be efficiently used for balancing fluctuating renewable resources, like wind or solar. CNG could also represent a cheaper fuel alternative for road transportation than gasoline or diesel. Finally, the agricultural sector could benefit from the ability to locally produce more affordable nitrogenous fertilizers compared to current imports. For these applications, competitive prices have been estimated and range from around $15/MMBtu for cooking to more than $30/MMBtu for transportation.

For the time horizon 2050, one scenario of the modeled natural gas transmission system, that includes investments to bring gas to city gates, reaching 263 major urban areas within eight countries (Mozambique, Malawi, Tanzania, Kenya, Uganda, Rwanda, Burundi and Ethiopia) would need a total investment of $57 Billion. This system would reach 185 million people in urban areas where in addition to power, gas would provide clean cooking and clean fuel for public transport vehicles. The wider benefits of power and industry would reach up to 600 million people in East and Southern Africa (not including the benefits to South Africa itself from the bulk supply). The system when fully deployed would annually deliver 2.9 tcf of gas to the 8 countries and an added 1.3 tcf to South Africa. At this macro level, the cost of bringing gas to urban centers would be roughly about $5/MMBtu in addition to the upstream costs (around $3/MMBtu). This suggests that with good coordination between stakeholders, the development of the domestic market at large scale, in combination with LNG export, is possible. In addition, part of the revenues generated by LNG exports could also be used to partially finance the domestic gas infrastructure.

To highlight this research, SEL together with the United Nations’ Sustainable Energy for All, Columbia University’s Center on Global Energy Policy, and Columbia Global Centers-Africa co-organized a workshop in Addis Ababa on June 2nd, 2014, to present and discuss the preliminary results. Participants included senior officials from East Africa, the United States, and the East Africa Community as well as representatives from the World Bank, oil & gas industry, academia, and leading energy consultancies.